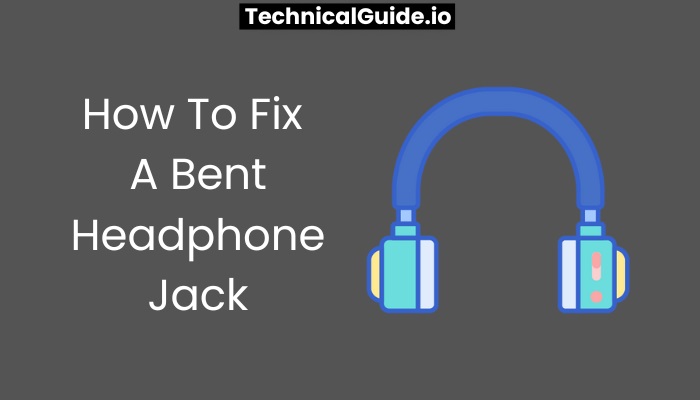 A phone connector known as a headphone jack or audio jack is a family of electrical connectors typically used for audio signals. The headphone jack is cylindrical, with a grooved tip or rounded one to retain it. Typically, in its original audio configuration, it has two, three, and four or five contacts with TS, TRS, TRRS, and TRRRS for their respective number of grooves on the jack, where the T stands for the tip, R stands for ring and S stands for the sleeve. The most commonly used jacks are the 3.55 mm jack which stands for the outside diameter of the jack.

Most music fans, love listening to music using earphones or headphones to get their tunes closer to their ears. But these gadgets are prone to wear and tear due to the frequent insertion and removal in their port. The jack can sometimes become loose or bend due to pressure when inserted into its port. If you encounter such an issue do not panic. Below are some steps on how you can handle a bent headphone jack.

If you have never manually repaired something, it’s best to check first with an authorized personnel or repair shop to help you replace your jack.

First, you will need repair tools

These two steps for manually realigning the jack are as follows:

The second process is as follows:

Doing this might break your jack, and the jack pin may get straightened but not respond afterward. DO IT AT YOUR OWN RISK.

In this section of the guide, I will look at the two simple ways to replace your jack using simple and get the best result with your audio output.

One needs to note there are two points where one can replace the jack. The first is from the wire that leads out to the earpieces while the second is from the jack at the middle point.

You will need the following tools:

It’s vital to remember that headphones are intrinsically analog devices because they are transducers. AC (alternating current) voltages are all that analog audio signals are. Electrically conductive wires are used to transmit these signals.

The internal matching of a headphone cable’s wires to its plug’s distinct conductors also applies to the audio source jack’s conductors, each of which conveys a different signal.

To allow the analog audio signals to flow from the source through the cable and to the proper headphone drivers following the wiring schemes, it is necessary to make contact between the jack and the plug conductors.

Without disassembling the connector, we can rarely truly see the physical connection between a headphone plug and a jack. The universal jack requirement, generally used by the CTIA (cellular telecommunication and internet organization), a widely recognized regulator, specifies the TRRS, which is the 3.55 mm jack. Therefore, we will discuss the 3.55 mm jack replacement in our guide.

The heat shrink wraps the wires around the case and then screws them into the plug. Test your new headphone plug.

How To Avoid Bending Your Headphones

It is easier to stop the breakage and bending of your earphones rather than fix them. Below are ways you can follow while using your earphones to prevent them from damaging.

Frequently Asked Questions (FAQs) on headphone issues and their diagnostics:

Grab some copper wires into thin pieces, and open the headphone jack, noting different headphones or earphones have different ways of opening the jack plug or cabin. Check where the wire is attached to the headphone jack and ensure there is space, if none create a hole until you see the wires.

2.    How Can I Make My Headphones Sound Louder?

To protect your internal ear, the smartphone can include volume limiters. You can adjust the volume limiter by manually increasing the volume and bypassing the prompt message on securing your hearing on your device.

If your headphone jack is not functioning, it might be due to damage to the jack itself or the headphone. You should thoroughly examine to check for any physical harm on the headphones that could interfere with the functionality of your device.

A software error or outdated driver may also be an issue on the device you’ve connected your headphones. Remove your headphones to check the problematic application or update your sound and audio drivers to resolve this issue.

The most common jacks used for the standard headphone pin are the 3.5 mm jacks found in most audio players like laptops, smartphones, tablets, and field recorders, among other commonly used audio players and distributors. Headphones typically use the TRS 3-pole 3.5 mm connectors whilst headphones with a microphone use the TRRS 4-pole 3.5 mm connectors.

5.    Do I Need Open Or Closed Style Headphones?

The closed style usually closes and seals the ear to the headphones, this helps create a good bass response and blocks external interference, this might be good for short time use, but during long sessions it might be discomforting and may damage the inner ear of the user. Open headphones have a comfortable and simple approach thus they sit on the ear easily while allowing ambient noise, therefore it is advisable to use open headphones while outside to allow better interaction with your surroundings.

6.    I Need DJ Headphones. What Features Should I Consider?

The most significant feature is a sufficiently high sound pressure level (SPL) to hear vividly above the external player or the external sound system. Though having a closed-back design with good ambient noise reduction and rejection can allow monitoring of the sound at lower volume levels. For a DJ a replaceable and washable ear cushion can come in handy in maintaining your headphone longer.

This first widget will style itself automatically to highlight your favorite product. Edit the styles in Customizer > Additional CSS.