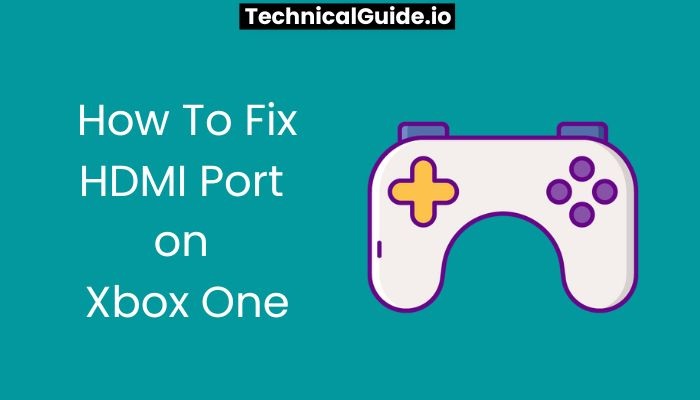 It is challenging to comprehend the terminology, version numbers, and specifications for your watching experience because there are so many variants. Being a part of the Xbox system, the Xbox One port can sometimes malfunction and will need troubleshooting in such occurrences. The following steps can help you when you encounter any trouble with your HDMI Port in your Xbox One.

Alternatively, try connecting the Xbox console to another TV.

Press and hold both the POWER button and EJECT button on the Console together for around 20 seconds until you hear the second beeping signal. The power light will flash on before the beep. Wait until the beep occurs before letting go. Xbox will launch into Low-Resolution Mode (640*480). After, one can adjust the resolution manually if you connect Xbox to a TV that doesn’t support the current resolution on the Xbox’s settings.

If a Blank TV screen shows when running any disc on the console.

If the problem persists, you can visit an authorized repair shop, one authorized by Microsoft, and have the HDMI port fixed by authorized personnel. In such tech firms, you will get the right advice and a deeper look at what is wrong with your device with expert analysis, which will eventually help you in the right course of action.

Frequently Asked Questions (FAQs) on Xbox One issues and their diagnostics:

There are a few possible reasons your Xbox can’t progress past the green screen. That your Xbox is not receiving enough power is one possibility. Try a new power outlet if the Xbox’s power supply light won’t turn on. You might need to change the power supply if your Xbox is still underpowered.

When you try to use an HDMI cable, your TV could display NO SIGNAL for several reasons. Your TV HDMI ports could not be active, for example. Go to your TV settings and look for an HDMI option to verify this. If this option is disabled, turn it on to make your TV compatible with an HDMI cable.

True, HDMI ports can malfunction. A faulty cable or a loose connection is typically to blame for this. Make sure the wires and connectors are in good condition and securely linked before attempting to troubleshoot your HDMI port. If that doesn’t work, the port might need to be changed.

An HDMI connector can be fixed. The damaged pins can typically be removed from the connector and replaced with new pins if it is damaged. To fix the connector, you can alternatively utilize a connector repair kit.

There are several potential causes for this problem. First, confirm that your Xbox is plugged into the TV and that your TV and Xbox are all switched on. Check whether your TV’s input may have changed if they are both turned on and properly plugged in. If it doesn’t work, you might need to change your Xbox settings.

There are several potential causes for this problem. Checking the wires to make sure they are all connected correctly should be your first step. Attempt resetting your Xbox by pressing and holding the power button for 10 seconds if they are. If it doesn’t work, your TV might be malfunction. To determine if the issue persists, try connecting your Xbox to a different TV. You might need to have your Xbox serviced if it does.

If the HDMI port on your Xbox One is not functioning, you can try a few different things. To start, try disconnecting and re-plugging the HDMI cable. Attempt using a different HDMI cable if that doesn’t work. You might need to replace the Xbox One’s HDMI port if it doesn’t resolve the issue.

This first widget will style itself automatically to highlight your favorite product. Edit the styles in Customizer > Additional CSS.